Once a year, representatives of the 27 member states on the Council of the EU meet to set the bloc’s fishing quotas. The decisions are made behind closed doors, often ignoring scientific advice. This process is contributing to the depletion of fish stocks in Europe’s seas. The Mediterranean and the Black sea are already the most overfished regions on the planet. 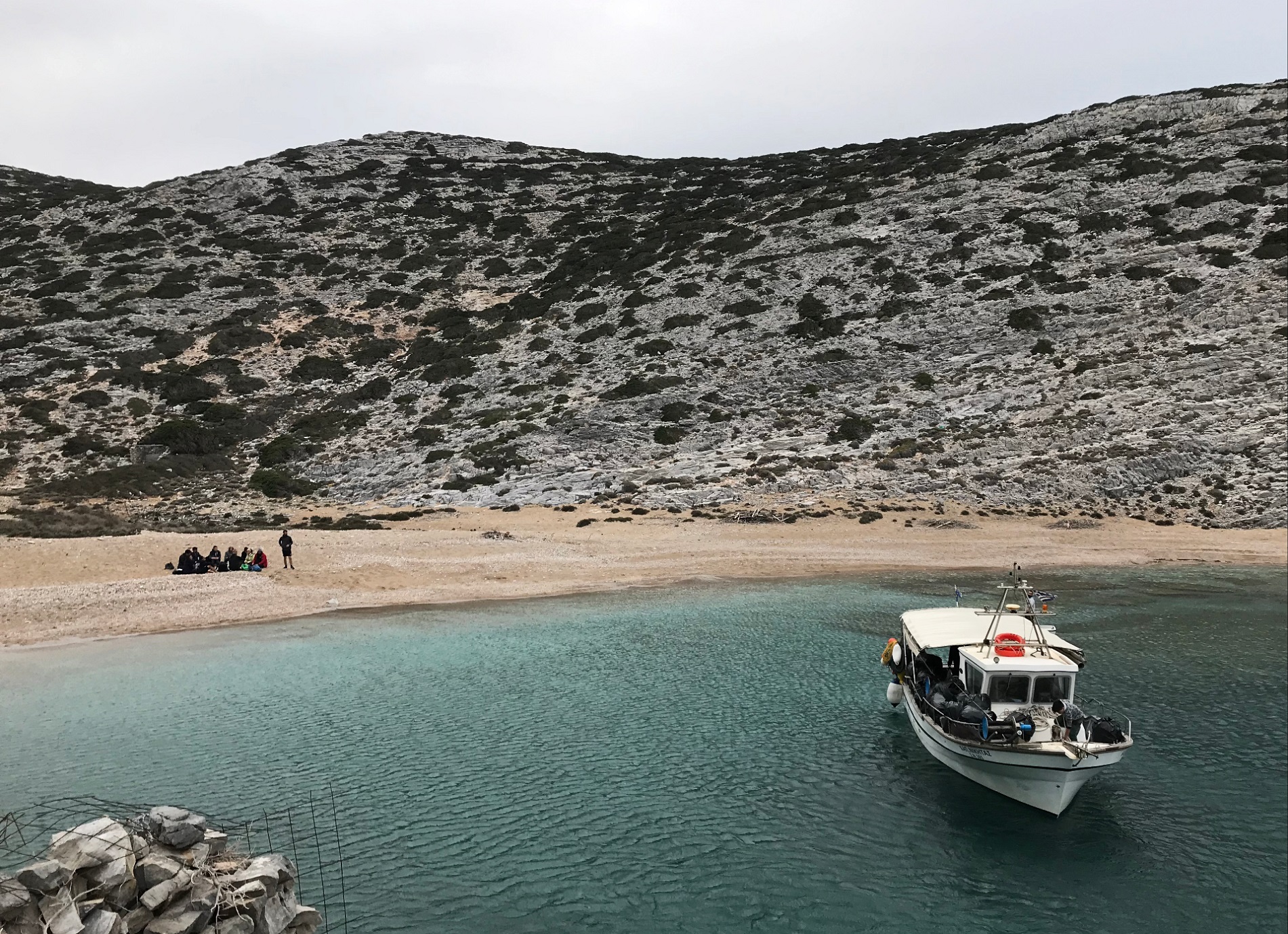 Secrets of the Council
The Council of the European Union: 27 Governments. 150 committees. Unnamed diplomats. Secret negotiations. Thousands of paragraphs written into the laws that govern our lives. That is why Investigate Europe, in cooperation in Greece with Reporters United, will be following the Council’s proceedings closely, reporting on which governments are blocking or watering down legislative proposals, and with whom they are in league.

It is Saturday morning, and Nicolas Vekris, a 69-year-old fisherman, has come to Katapola on the island of Amorgos to work on his fishing boats which are moored in the picture-postcard harbour. “I am the fourth generation in my family to make a living from fishing,” he says. “My great-grandfather, my grandfather and my father were all fishermen. In high school, I imagined becoming a merchant seaman, but I loved fishing too much to give it up. My father first took me in his fishing boat when I was seven years old, and I have been a captain since 17. Half a century, a lifetime, a love affair with the sea”.

Nicolas recalls the storms he has weathered at sea. “Each time I crossed myself and prayed to St Nicholas to protect us. But what worries me now are not the storms, but that the sea is running out of fish,” he says. “Forty years ago, we set out with half the nets we have today, and we would return to harbour with the boats loaded with fish from top to bottom. Soon we’ll be saying “thank God” for bringing in a bucket of fish.” Nicolas says none of his five children will be following him to sea, since she has less to offer. “Infinite sadness,” he sighs, as he and hundreds of small-scale fishermen are witnessing how their seas are being emptied by trawlers and the reluctance of the government to control their illegal and abusive practices.

The source of Nicolas’ predicament, which is shared by thousands of fishermen across the Mediterranean, is located thousands of miles away, in the headquarters of the Council of the EU in Brussels, where decisions are taken as part of the common fisheries policy.

On the 15th and 16th December 2020, the Council of the EU convened, as it did every year, to negotiate the fishing quotas which would be applied in the coming year across the European seas, including the Atlantic, the North Sea, the Mediterranean and the Black Sea.

The Council is responsible for determining not only national fishing quotas but also the total allowable catches (TACs), with the aim of protecting the biodiversity of marine ecosystems and tackling overfishing, which is responsible for the depletion of fish stocks.

On the subject of fishing — and by extension, the protection of Europe’s seas — the responsibility of the national governments which are represented in the Council is heavy. The Council of the EU is the most important of the European Union institutions, as no law can be adopted without its approval, even if it has passed in the European Commission and the European Parliament. The Council is made up of representatives of member state governments, and not EU officials.

From the outside, the process of setting fishing quotas can resemble an arcane ritual.

Before the Council reaches its decisions, the scientific community — led by the International Council for the Exploration of the Sea (ICES) — submits its recommendations for catch limits on each marine species. Based on these, the Commission puts together its proposals.

“Scientific advice is at the very basis of the whole process”, says Jenni Grossman, Fisheries Science and Policy Advisor at ClientEarth, an environmental law charity, to Investigate Europe and Reporters United. “We can all agree that we want sustainable fisheries in the long-term and in order to get there, we need an indication of how much fish we can get out without damaging the fish stocks. [Scientists] use data and estimate how much fish there is and how much we can take out. Without science, we would be fishing in the dark”.

Governments, however, don’t always respect scientific recommendations, and the Council’s procedures are designed to hide the decision-making process behind a veil of secrecy.

“After receiving advice from scientists, the Commission releases its proposal for the fishing quotas that have to be decided for the next year. After that, the next public information is the outcome of the negotiations,” explains Andrea Ripol, Fisheries Policy Officer at the environmental NGO, Seas at Risk. “There’s nothing between these two stages. It’s a black box. We don’t know the position of every member state, what’s the reasoning and the arguments used by each country to defend their views and to set fishing quotas above scientifically [recommended levels]”.

This can be illustrated by one recent example. Investigate Europe gained access to a European Commission non-paper dated 8 December 2020 containing its recommendations on TACs. It had been forwarded by the Council’s General Secretariat to the national delegations of the member states. While the Commission had published its version of the document, the Council version was stamped “limité” (limited distribution), which in principle prevents it from being made public. European Ombudsman Emily O’Reilly has condemned the indiscriminate use of “limité” as “almost automatic” in Council practice, finding it symptomatic of the institution’s culture of secrecy.

What could the Council hope to hide by limiting the distribution of this correspondence? In this instance, the Commission focusses on catch limits for Eastern blue-fin tuna and Northern shortfin mako shark, both of which are threatened by overfishing. The Commission proposes that pandemic-linked delays in issuing updated scientific recommendations should not prevent the EU from adopting unilateral catch limits based on the existing strict guidelines.

Behind closed doors in the Council, national governments are free to agree on quotas and catch limits that significantly exceed sustainable levels. This practice systematically puts the interests of industrial fishing ahead of the marine environments which are depleted. Coastal fishermen — who are forced out of their livelihoods when their catches dwindle — also lose out. And while the Council’s doors are closed to ordinary citizens, the same is not true for the industrial fishing sector, which is able to gain direct access to decision-makers.

In 2015 and 2016, lobbyists for the Dutch and Spanish fishing industries were able to use press passes to gain access to the Council headquarters while fishing quotas were being negotiated.

“They managed to present themselves as journalists, saying that they were directors or managers of the newsletter of their own company,” says Andrea Ripol of Seas at Risk, which, in collaboration with Corporate Europe Observatory, exposed the lobbying activities of the fishing industry in the Council. “This granted the industry privileged information and an opportunity to influence the national governments with their arguments.”

“In both years, the industry secured fishing quotas above the scientific advice,” Ripol claims. “Spain also successfully fought to overturn initial Commission proposals to substantially reduce allowable quotas for some species. For example, hake fished in Spain’s southern waters was eventually reduced by only 21.5% for 2016, compared to a 60.5% reduction which was initially proposed. So we can see that there is a connection between lobbying and the ministerial decision.”

This is just one documented instance where national governments failed to protect the public interest by safeguarding environmental sustainability. According to the UN’s Food and Agriculture Organisation, 62.5% of fishing stocks in the Mediterranean and the Black Sea are overexploited, making them the most overfished regions on the planet.

The situation is also problematic in other European seas. According to a 2020 study by the New Economics Foundation, 52 out of the 120 TACs were set above the levels defined in the scientific advice as sustainable. This amounted to a total of 79,300 excess tonnes of marine species up for grabs over and above the scientifically recommended limits. Sweden, Denmark and France were the countries that most exceeded sustainable fishing levels (by 13%, 6% and 6% respectively).

In June 2019, ICES highlighted the depletion of cod stocks in the North Sea and asked for quotas to be cut by 70% to allow for stocks to be replenished. The cod population fished by the UK, Denmark and Norway in the North Sea increased during the 1970s, reaching 270,000 tonnes, but has since fallen to 44,000 tonnes in 2006. This is not unique to cod; 40% of fish populations in the North Sea are overfished.

“We should lose no time in doing our duty in order to protect our islands, our homes.”

In a landmark decision in April 2020, the European Ombudsman requested governments to immediately publish documents relating to fishing quotas. The Council has ignored her recommendations, as it has the rulings of the European Court of Justice which also demanded greater transparency.

“More transparency would definitely help,” argues Jenni Grossman of ClientEearth. “I don’t think that magically all the decision-makers would suddenly do the right thing. But if you allow things to be done behind closed doors, it’s easier to defy science. If governments know they will be kept accountable for what they decide, it will be harder for them to take decisions damaging marine ecosystems”.

While the loss of biodiversity is changing the Mediterranean for the worse, there’s something that remains unchangeable. That is the love that Nicolas and other fishermen have for the sea. It drives them to do their best for the rich marine ecosystems and their islands.

“While the authorities should do more for our seas, we should lose no time in doing our duty in order to protect our islands, our homes,” he says some weeks later. Along with other fishermen, he is collecting huge amounts of plastics and rubbish from a remote beach in Amorgos. Seeing him and his friends trying to protect the place and the sea that fed them for decades gives hope. Perhaps their eagerness for change will inspire the member states to follow the same path and deliver a long-awaited solution.