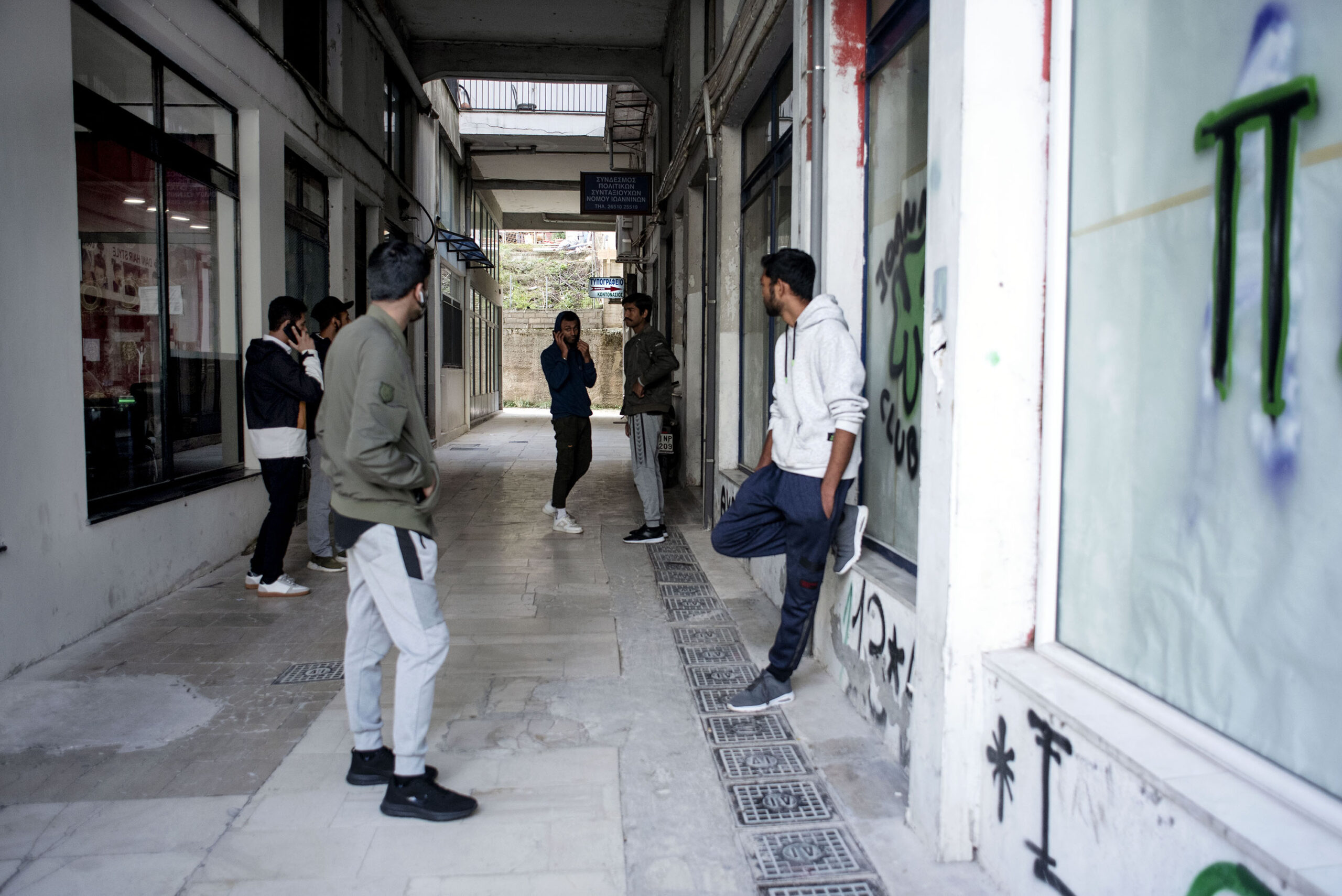 Our car approaches Nitsiakos and Pindos poultry farms, located a few kilometres apart, outside the city of Ioannina in northwest Greece.

These two businesses, together with Ambrosiadis in Katerini further to the east, are some of the biggest in Greece. They are pillars of their local economies, each employing hundreds of people. With the outbreak of the Covid-19 pandemic, they also became infection hot spots.

In October 2020, Pindos announced that it was suspending the operation of its poultry processing plant after several cases of Covid-19 were identified. In June 2021, medical staff at Katerini hospital traced 30 cases of Covid-19 among foreign workers at the Ambrosiadis plant, outbreaks that had been kept secret.

In July 2021, Greece’s Civil Protection Agency ordered a temporary suspension of operations at Nitsiakos after tracing a local outbreak among its workers. The Mayor of Ioannina, Moses Elisaf spoke at the time of a “serious and extremely worrying” situation, noting that “the people involved were unvaccinated, despite working in crowded, high risk workplaces”.

In the barn and the slaughterhouses

Greece’s Food Safety Agency, EFET, classifies poultry farms as high risk workplaces  due to their intensive, crowded working conditions, but prioritizing them for vaccines is another matter.

Most poultry businesses work with Greek, Pakistani and Albanian subcontractors, who supply them with workers, mostly from Pakistan, India or Afghanistan. Some of the workers have a residence permit or have been granted asylum. Many, however, are undocumented, while our investigation showed that some are under the legal working age of 18.

The exploitation of undocumented workers, which had been a humanitarian and employment rights issue before the pandemic, has now evolved into a public health issue as lack of access to vaccination undermines the entire national vaccination programme.

While undocumented labour in poultry farms is an open secret among migrant communities, it was hard to get anyone to speak to us on the record, even on condition of anonymity. One worker finally agreed to be interviewed.

Hassan (his real name is known to Lighthouse Reports) is 19 years old and comes from Pakistan. He arrived in Greece in 2018 as an unaccompanied minor. The conditions he encountered here forced him to grow up quickly.

At 16, while still living in the “safe zone” for unaccompanied minors inside an accommodation facility for refugees and migrants, he took his first job at a poultry farm.

He spent several months without papers, but eventually he was granted leave to remain in the country on humanitarian grounds. This was not the case for other workers, and the legislation under which Hassan was given papers has now been rescinded. “Even now, there are people working there without papers, as well as children from migrant facilities who are under 18,” Hassan explained.

“There have been anonymous reports of the poultry farms using undocumented workers,” said Despina Konstantinou, President of the Katerini Labour Association. “However, they have been difficult to substantiate…They belong to different nationalities, they sometimes come from different parts of Greece and work for short stints.” This makes it almost impossible to cross-reference names with shift records.

“Until now we haven’t been given any information on vaccination,” Hassan said. “The only instruction we are given is to wear our protective suits. Not everyone is vaccinated.” Hassan took the initiative himself and got vaccinated three months ago, mainly, he said, because he was afraid. “Migrants are often given fines for no reason, but mostly I just didn’t want to catch the virus.”

It is not the same for his fellow workers: “Every week some people get sick. They leave and then they come back after 14 days. In the summer there were no cases, but now they have gone up.”

Greece on the Lighthouse Reports Scorecard

The visualisation can be found in the Lighthouse Reports website.

Greece is not the only country where the meat processing sector has been at the epicentre of Covid-19 outbreaks. Similar incidents on an even greater scale were recorded in Belgium, France, Ireland, Spain, Poland, the Netherlands, the UK, and particularly in Germany.

What sets Greece apart is the official response to the problem, which does not follow any of the approaches adopted elsewhere.

In Germany, for instance, the federal government passed a law in November 2020 barring meat processors from using temporary agency workers.

The ECDC has urged member states to include the vaccination of migrants as a priority in their national vaccination plans. Lighthouse Reports has mapped vaccination policies in 18 European countries. Reporters collected evidence relating to each country’s official policy towards on vaccinating undocumented migrants.

In Greece, the lack of reliable, detailed public policy makes it difficult to draw conclusions. While the country appears open and positive at the level of official pronouncements, the official policy and reality on the ground are quite different. Greece scores low for access to vaccination by undocumented and marginalised populations.

While the country has struggled to presuade a significant section of the local population to get the vaccine, it has also been desperately slow vaccinating undocumented migrants. The only targeted information campaign was Vaccines For All, co-organised by INTERSOS Hellas, the Greek Forum of Migrants and the Greek Forum of Refugees. The campaign started in August 2021 with materials available in 10 languages.

According to Apostolos Veizis, a medical doctor and director of INTERSOS, the Greek state never ran an organised campaign in migrants’ native languages, while on the side of the vulnerable populations there was suspicion that the pandemic could be used as a way to criminalise and deport them.

While the potential “blind spot” relating to undocumented migrants was already becoming evident in 2020, the government first acted to provide access to vaccination in the spring of 2021 – even then however, the published policies were far from effective.

In May 2021, government guidance was issued allowing those with identification documents from their own countries to obtain a temporary social security number (known by the Greek acronym PAMKA) to allow them to get vaccinated.

“Many migrants, however, lacked these papers”, said Veizis, “meaning they still lacked access to vaccination.”

On October 2, 2021, in response to pressure from civil society organisations and public health experts, a new law (4839/2021) gave undocumented the right to obtain a PAMKA number, which would allow them to get vaccinated without risking deportation. It also gave local authorities and NGOs the ability to participate in the vaccination programme.

In practice, however, there have been delays in implementing the law, and it is still not possible for most undocumented migrants to get vaccinated. A Joint Ministerial Decision issued in  December 2021 – two months after the law was passed – gives undocumented people access to the official vaccination process. However, according to Lefteris Papagiannakis, a legal expert and director of the Greek Council for Refugees, this only opens the door to people who have some form of identification document, even if it is expired or invalid. People with no papers at all – the so-called “invisibles” – are still unable to register.

“It is very positive that the process was put in place, as this is very important for the protection of public health,” said Papagiannakis. “However, the state should also provide for those who have no papers at all”, he concluded.

The lists of the invisibles

A photo on the wall of the meeting room of the Centre of Ioannina Labour Unions, a regional trade union organisation, shows a group of women, workers in a poultry farm, probably taken some time in the 1990s.

On the table in front of us, next to a pack of cigarettes and an old-school mobile phone belonging to the labour union’s president, are lists from the Labour Inspectorate containing information on two employment agencies, one run by a Greek woman, the other by a Pakistani man, which supply temporary workers to the Nitsiakos and Pindos poultry plants.

The lists include the employment details of workers for the financial years 2017-2020. They show 292 workers, with around 90% listed as working 4- or 6-hour shifts. “In reality, there is no such thing as 4- and 6-hour shifts at the plants”, Nikos Exarchos, the labour union president tells us. “They work 8, 10, 12 hours. We can’t demonstrate it, but that is the reality we know, we live it”, he says.

This is not just the case in Ioannina and Katerini. In many parts of the country, particularly in farming areas, undocumented workers are the norm. “There is a tacit acceptance of this reality, which shouldn’t really exist. Profits are made on the back of people who exist in a legal grey area,” states Papagiannakis.

No one knows – even by approximation – the number of undocumented people who have been vaccinated in Greece to date. We have been trying since the beginning of November 2021 to obtain information through repeated requests from the Ministries of Health and Migration Policy, with no success.

Back in Ioannina, in the neighbourhood of Kaloutsani, we met several people without identification papers who told us about their efforts to get vaccinated. None of the state agencies helped them. Their only sources of information have been social media, friends and acquaintances. Despite trying, none of them had succeeded in getting vaccinated.

The poultry businesses and their subcontractors

Lighthouse Reports and Reporters United have contacted all three poultry businesses named in this investigation with questions relating to the story.

A spokesperson for Nitsiakos responded that “the vaccination rate among employees, including workers employed through subcontractors, approaches 90%. It goes without saying that we are not in a position to enforce vaccination on those who wish to remain unvaccinated.”

A member of the Ambrosiadis AVEE board denied the existence of “invisible” employees. “All the workers here are real people. I can’t respond to hypothetical questions. There are no people without papers ; that would be a matter for the Labour Inspectorate.”

A representative of Ambrosiadis acknowledged that there are workers in the company who are unvaccinated but claimed that all protocols are observed, including rapid tests, while there is continuous monitoring and updating.

The case of Ambrosiadis offers an insight into how the practice of “renting” employees from agencies serves to distance businesses from their responsibilities, while on the other hand making it incredibly hard to identify and trace employees, particularly those without papers.

The company’s spokesperson acknowledged that Ambrosiadis used subcontractors, claiming that this was due to a lack of Greek workers for the slaughterhouses. “The responsibility lies with the contractor who employs them, we have a relationship with them and not with the workers directly”.

Pindos did not respond to our requests for information.