In a Reporters United exclusive, technical analysis of mobile phone footage by OSINT group Disinfaux Collective appears to show a police officer throwing a petrol bomb during the recent disturbances in Athens, while a separate video appears to link police with a pro-New Democracy social media account. 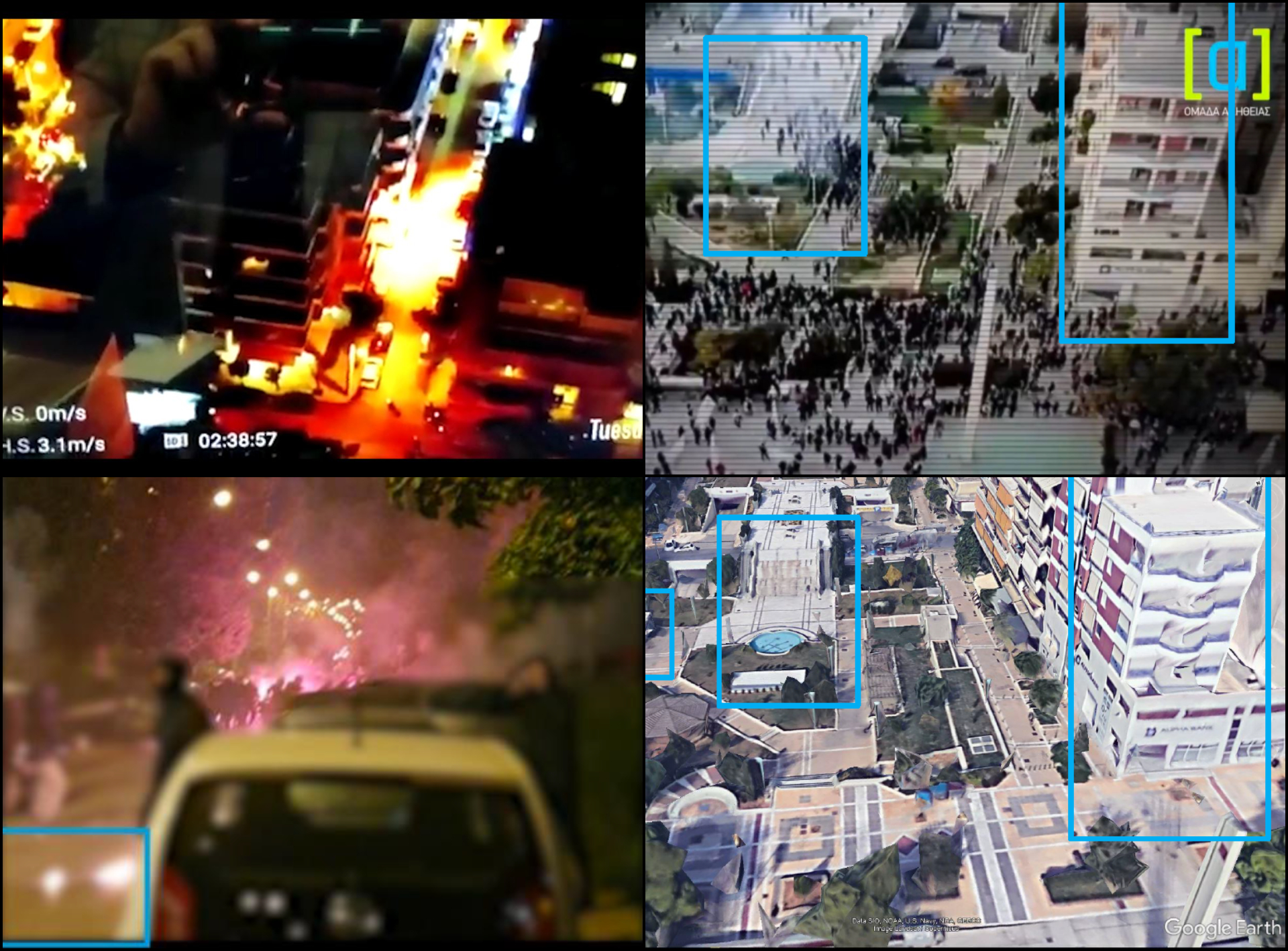 Reports of police brutality are on the rise in Greece, as recent weeks have witnessed an escalation in protests which have been met with heavy enforcement. In one of the most controversial instances, heavy-handed policing of lockdown rules prompted a series of confrontations between protesters and police in the unlikely setting of the suburban neighbourhood of Nea Smyrni in Athens. Video evidence from the scene of the clashes appears to show police engaging in dangerous and unprofessional tactics, while also suggesting attempts to control the dissemination of information through selective leaks.

Mobile phone footage shot by an eyewitness to the violent disturbances which shook the neighbourhood of Nea Smyrni on March 9 appears to show a person standing near a unit of the Greek police’s DRASI motorcycle unit throwing a petrol bomb in the direction of protesters. The footage was analysed by OSINT group Disinfaux Collective, and today Reporters United publishes the video and accompanying technical report.

Further video evidence from the day’s events raises questions about the use of surveillance drones by the Greek police, including about how footage from an aerial source (drone or helicopter) found its way onto the social media accounts of the “Omada Alithias” (“Truth Squad”), an opaque group with a strong presence on social media which supports the governing New Democracy party, before it was officially published by the police itself.

Reporters United approached both the Hellenic Police and Omada Alithias with questions raised by the report, but had not received a response at the time of publication.

Did a police officer throw a petrol bomb to the protesters?

Οn the afternoon of Sunday, March 7, in the residential neighbourhood of Nea Smyrni in the southern suburbs of Athens, police officers enforcing lockdown measures were witnessed intimidating members of the public and beating a civilian, while they later fired teargas at residents protesting their actions. There was widespread shock and anger at the incident, which prompted a series of organised protests on subsequent days.

On the evening of Tuesday, March 9, during a protest in the same area, Gautier Velissaris, a singer-songwriter and local resident, shot a video on his mobile phone. The video shows a person standing close to a group of officers belonging to the Greek police’s DRASI motorcycle unit throwing what appears to be a petrol bomb towards protesters.

“I do not belong to a political group, nor am I anti-establishment. I decided to take part in the protest because I was angered by what had taken place in previous days in Nea Smyrni, a peaceful neighbourhood, where kids play with their grandparents”, says Velissaris.

“The climate was harsh”, Velissaris told Reporters United, “some of the chanting was aggressive and belligerent, but by and large people were peaceful. When the first trouble erupted [on Sunday], I was with my three-year-old daughter and my father on the square. After that I felt that I should take part [in the protest] to put a stop to police impunity”.

Two days later, on Tuesday March 9, a rally organized in the same neighborhood to protest against police abuses descended into violence, in the course of which one police officer was seriously injured after being dragged off his motorbike and attacked by a group of unidentified men. Three suspects are being held over the incident, while some of those remanded in the aftermath of the incident have complained of mistreatment including beatings, threats and sexual harassment while in police custody.

After part of Velissaris’s video analysed by Disinfaux Collective was shown on Kontra Channel, a local TV station in Athens, on March 12, and later reproduced by several mainstream media outlets, the Ministry of Citizen Protection issued a statement announcing an internal investigation into “reports which refer to police officers throwing petrol bombs at demonstrators”.

Disinfaux Collective produced a detailed 37-page report on the video footage which we publish here for the first time.

Frame-by-frame analysis pinpoints the position of the person appearing to throw the incendiary device immediately adjacent to a group of police officers belonging to the DRASI unit. The person’s clothing resembles that of the police officers, including the characteristic white helmet. The analysis concludes that “the individual is either a police officer of the DRASI unit and is part of the squad, or is present under its supervision throughout the incident”.

The Disinfaux Collective analysis also disputes a theory floated on social media, that the person was “returning” the device, as there is no evidence in the footage of the protesters throwing an incendiary device towards the police in the moments leading up to the incident. The device is identified as “a glass filled with flammable liquid”, of the type known as a “Molotov cocktail”.

These observations lead the authors of the report to ask, “if the person is not an on-duty police officer or if they are a civilian, why did the other police officers of the DRASI unit allow him or her to throw the incendiary device, or why they did not remove him or her before the incident, and why was he or she not removed from the premises after it was thrown, in accordance with the legal principle of in flagrante delicto (caught in the act)?”

The missing seconds of the police video

The Hellenic Police has published two video sequences on their official YouTube channel with drone footage from the disturbances which took place on Tuesday, March 9, in Nea Smyrni (clip 1 and clip 2).

The videos cover approximately the same time frame as that recorded in the Velissaris footage. The Velissaris video takes place between 19:18:65 and 19:20:01. The police videos start at 19:15:00 and end after the petrol bomb was thrown, however the footage is not continuous. Several seconds are missing, including the crucial moment when the person in the Velissaris video throws the device towards the protesters.

In their analysis of the Velissaris video, Disinfaux Collective have pinpointed the moment in time when the sound of breaking glass can be heard as the petrol bomb hits the tarmac, while the report adds that “the analysis of the audio-visual material also shows the footprint of the liquid fuel contained in the incendiary device, and the fact that it hit the road at very close distance to protesters and parked vehicles.” This moment does not appear in the published police video.

It is worth noting that the footage uploaded by the police does not come directly from the drone cameras, but consists of a mobile phone recording of the drone footage being played on a screen. The reflection of a person holding up a mobile phone to record the screen is clearly visible in one of the two clips.

The police videos raise more questions than they answer – specifically:

Reporters United posed these questions to the Hellenic Police. At the time of publication, no answers had been received despite repeated requests to the force’s press office.

“In recent months, more and more citizens and photojournalists have reported receiving threats from police aimed at preventing them from recording incidents of police brutality and misconduct”, Disinfaux Collective told Reporters United. “This report demonstrates not only why citizens’ right to record the police should be protected, but that when incidents like this come to light, the information provided by the police themselves is incomplete”.

Disinfaux Collective are working to apply OSINT techniques more widely in Greece. One of the pioneers of the approach, London-based Forensic Architecture, became widely known in the country after providing expert testimony in the murder cases of Pavlos Fyssas (which resulted in criminal convictions and jail sentences for the leadership of the neonazi Golden Dawn party)  and Zak Kostopoulos (a young LGBTQ activist beaten to death in broad daylight in central Athens).

“Citizens are rightly demanding that the authorities investigate these recent events”, Stefanos Levidis, a member of the Forensic Architecture team, told Reporters United. “Our collective experience, however, has shown that in the rare instances when the police are tasked with investigating the police, the findings are at best incomplete and unreliable. Under these conditions, having access to the evidence and being able to reconstruct events such as those which took place in Nea Smyrni should not be a state monopoly. Contrary to what their representatives insist, the police will not cleanse themselves. This duty falls to citizens, through their mobile phone cameras”.

Did the police leak unpublished aerial footage to a pro-government social media account?

A third piece of video evidence examined by Disinfaux Collective raises the alarming prospect that footage from police drones was leaked to the “Omada Alithias” (“Truth Squad”), a group active on social media, where they post in support of the governing New Democracy party.

At 18:12 on March 9, the day of the incidents in question, the Omada Alithias Twitter account posted a video showing protesters in the main square of Nea Smyrni, captioned “Nea Smyrni now. This is the kind of chaos that the left wants to impose”.

The tweet is a fairly typical example of the posts shared by Omada Alithias, a group which is known for aggressively backing the New Democracy party and assailing its political opponents, primarily through attack videos on social media. Little is known about the identity or funding of the anonymous group. It first appeared during the “Twitter wars” which fanned political divisions in Greece during the financial crisis, and now boasts 48.7k Twitter followers.

Disinfaux Collective’s analysis concludes that the video tweeted by Omada Alithias was filmed from the air, as “in the footage, the buildings depicted are in a much lower position than the buildings located nearby; thus, we can safely rule out the possibility that the material was taken from a balcony or the roof of a building nearby”.

From the coordinates of the location shown in the Omada Alithias video and positioning of the surrounding buildings it is clear that there is no building offering a high enough viewpoint to shoot a video from the angle shown.

This observation raises a number of questions, which Reporters United put to the Hellenic Police and the Omada Alithias group.

At the time of publication, we had not received answers from either Omada Alithias or the Hellenic Police.

It is worth noting that Reporters United in collaboration with HomoDigitalis and ThePressProject submitted in December 2020 Freedom of Information requests regarding the use of police surveillance drones, which have also not met with a response.